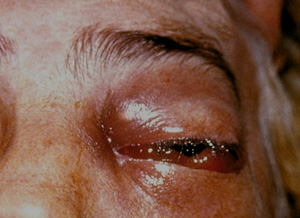 Mucormycosis and its homoeopathic medicine


Mucormycosis is an infectious disease. It is a fungal infection. This fungus initially enters the paranasal sinus. It extends cribriform plate to the sinus to involve the orbit and anterior fossa. Fungus invade to the blood vessels to cause haemorrhagic necrosis.

Mucormycosis, colloquially known as black fungus, is an infection from Mucormycetes group of fungi. It is abundantly found in environments, especially in soil.

It is previously called as zygomycosis. Mucormycosis affects people who have health problems or take medicines that lower their body's ability to fight germs and sickness.

It is most commonly affects the sinuses or the lungs after inhaling fungal spores of molds from the air. It can occur on the skin after a cut, burn or other type of skin injury.

It is generally spread by breathing in, eating food, concomitant by, or getting spores of molds of the Mucorales type in open wound.

These fungi are frequently present in decomposing organic matter such as rotting fruits and vegetables, leaves and animal manure but don't usually affected person.

Although they are found commonly throughout nature, these molds normally don't cause problems.

However in individual with weak or compromised immune system, they can cause severe, even life threatening infectious disease.

Frequently use of steroids

The infection spread to the other areas of the body

Avoid the contact with soil and water damaged buildings and protecting

Mucormycosis and its homoeopathic medicine