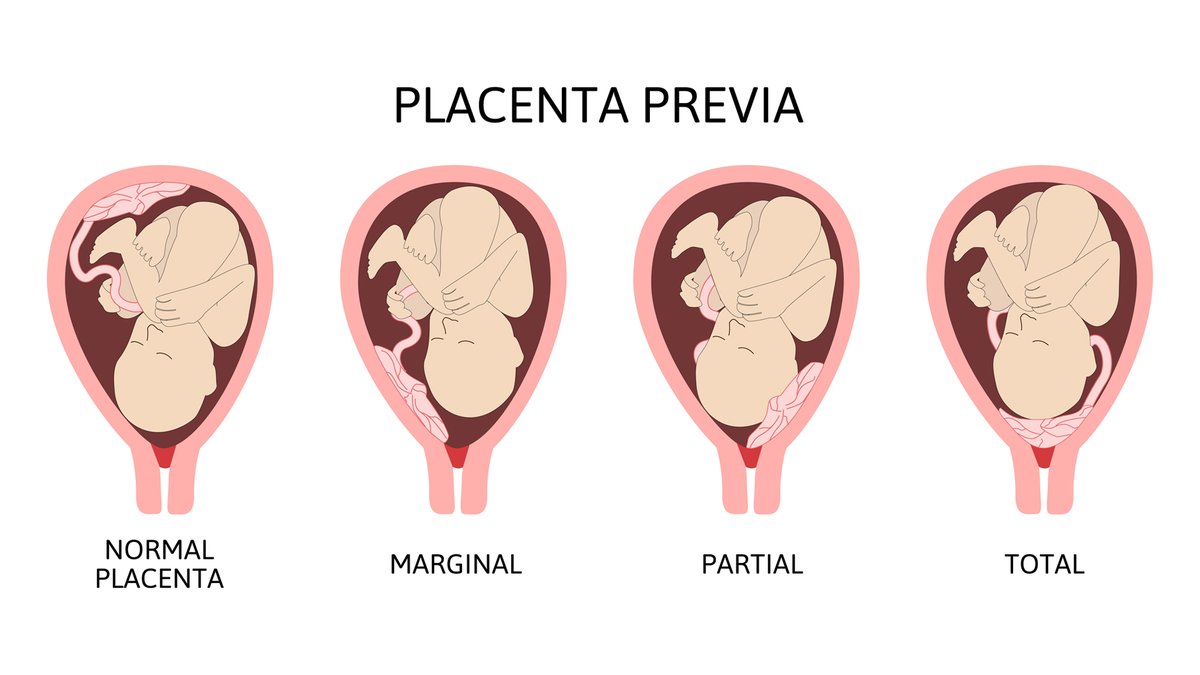 
When the placenta is implanted partially or completely over the lower uterine segment it is called placenta praevia. The term praevia denotes the position of the placenta in relation to the presenting part.

As the placenta growth slows down in later months and the lower segment progressively dilates, the inelastic placenta is sheared off the wall of the lower segment. This leads to opening up of uteroplacental  vessels and leads to an episode of bleeding.

As it is a physiological phenomenal which leads to the separation of the placement, the bleeding is said to be inevitable. The blood is almost always maternal, although fetal blood may be escape from the torn villi specially when the placenta is separated during trauma.

The mechanism of spontaneous control of bleeding are:

Thrombosis of the open sinuses

Mechanical pressure by the presenting part.

In about one-third of cases, there is a history of warning haemorrhage which is usually slight.

The bleeding is unrelated to activity and often occurs during sleep and the patient become frightening on awakening to find herself in a pool of blood.

The bleeding is unassociated with pain unless labour starts simultaneously.

In majority of cases, bleeding occurs before 38 weeks and earlier bleeding is more likely to occur in major degrees.

General condition and anaemia are proportionate to the visible blood loss.

But in the tropics, the picture is often confusing due to pre- existing anaemia.

The size of uterus is proportionate to the period of gestation.

The uterus feels relaxed, soft and elastic without any localised area of tenderness.

Persistent of malpresentation like breech or transverse or unstable lie is more frequent. There is also increased frequency of twins pregnancy.

The head is floating in contrast to the gestation. Persistent displacement of the fetal head is very suggestive. The head cannot be pushed down into the pelvis.

Fetal heart sound usually present, unless there is major separation of the placenta with the patient in exsanguinated condition. Slowing of the fetal heart rate on pressing the head down into the pelvis which soon recovers promptly as the pressure is released is suggestive of the presence of low lying placenta especially of posterior type. But this sign is not always significant because it may be due to fetal head compression even in an otherwise normal case.

Cord prolapse due to abnormal attachment of the cord Slow dilatation of cervix due to the attachment of placenta of the lower segment.

Intrapartum haemorrhage due to further separation of placenta with dilatation of cervix.

Increased incidence of operative interference Post partum haemorrhage is due to Imperfect retraction of the lower uterine segment upon which the placenta is implanted.

Large surface area of placenta with atonic uterus due to pre- existing anaemia.

Placenta praevia accreta is a serious complication that may cause maternal death.

Adequate antenatal care to improve the health status of women and correction of anaemia.

Significant of warning haemorrhage should not be ignored.

1. The patient is immediately put to bed

2. To assess the blood loss

3. Quick but gentle abdominal examination to mark the height of uterus, to auscultation the fetal heart sound and to note any tenderness on the uterus.

4. Vaginal examination must not be done.

Only inspection is done to see whether the bleeding is present or absent and to put a sterile vulval pad.

Arrangement is made to shift the patient to an equipped hospital having facilities of blood transfusion, emergency caesarean section and neonatal intensive care unit. (NICU).

'Flying squad' service is ideal for transfer of such type of patients.

Patient should be accompanied by two or three person fit for donation of blood, if necessary.

All the case of APH, even if the bleeding slight or absent by the times the patient reaches the hospital, should be admitted.

1. All the cases of APH  should be regarded as due to placenta praevia unless proved otherwise.

The bleeding may be recur sooner or later and none can predict when it recurs and how much she will bleed.